Ideas for a cgroups UI

On and off over the past year I’ve been working with Jason Baron on a design for a UI for system administrators to control processes’ and users’ usage of system resources on their systems via the relatively recently-developed (~2007) cgroups feature of the Linux kernel.

After the excitement and the fun that is the Red Hat Summit, I had some time this week to work with Jason on updating the design. Before I dive into the design process and the mockups, I think it’d be best to do a review of how cgroups work (or at least how I understand them to) so that the rest makes more sense. (And maybe I’ve got some totally incorrect assumptions about cgroups that have resulted in a flawed design, so hopefully my calling out the current understanding might make it easier for you to correct me 🙂 ).

A designer’s understanding of cgroups via diagram

So cgroups, which are sometimes referred to as containers (I think because a similar Solaris feature, zones, is sometimes called containers) can be used to slice an entire operating system into buckets, similarly to how virtual machines slice up their host system into buckets, but without having to go so far as replicating an entire set of hardware.

So this diagram kind of shows how four of the system resources that cgroups can control – CPU, memory, network, and storage I/O – could be cut into slices that are then combined into two groups – the yellow and the purple one – which make up virtual OSes. Say I gave cgroup #1 (yellow) to Sally, and cgroup #2 (purple) to Joe. Whenever Sally starts a process, you could set it to only run on the CPUs that are members of cgroup #1 (via cpuset), at whatever priority level is set for those CPUs (via cpu). It’ll only be able to use as much memory as was allocated to cgroup #1, only be able to use as much network and I/O bandwidth as cgroup #1 is able to use. When Joe starts a process, because he’s part of cgroup #2, he won’t be using the same CPUs as Sally. He may have more or less memory, I/O, and network bandwidth allocated to him.

It’s kind of / sort of like Joe and Sally are using different computers, on the same operating system. Cool, right?

Cgroups don’t have to go that deep, though. You don’t need to slice across an entire system.

You can have a cgroup that *just* deals with controlling access to the CPU. Or *just* controls memory. Or maybe only deals with two of the four (CPU, Memory, Network, I/O) resources, or just three of the four.

You can have a cgroup that *just* deals with one resource (say CPU), and that group only deals with specific processes. Or users. Or a combination thereof. (More later on that.)

Depending on the resource you’re looking to control and the cgroups module you’re using, you can configure access to that resource in different ways. I believe one of the more common ways of controlling CPU usage via cgroups is to assign ‘shares’ for various groups’ usage of the CPU (using the ‘cpu’ module.) I’m not sure what scale/units these shares are on, but they are relative to each other, so if I give group #1 a weight a 1024, and group #3 a weight of 2048, then group #3 will get scheduled for CPU time twice as much as group #1 will.

I don’t think this share system is particularly intuitive, which is still an open problem in the current draft of the UI design.

Other resources and modules let you control access in different ways. For example, the memory module lets you configure an upper bound of memory usage, I believe via providing the maximum number of bytes of memory that could be used by members of the group.

You can create and apply cgroups to processes and users on-the-fly or on a longer-term / persistent basis. Say some process is running amok and is starving other processes on your system… you can change the process’ cgroup membership on-the-fly to provide it a more limited set of system resources so that other processes on the system can run. However, this change would be temporal and may be based, for example, on a specific pid number that won’t apply if the process is restarted or the system is rebooted. If you’d like more persistent cgroup membership, you can create a set of rules (cgrules.conf). A neat simple thing you could do with cgroup rules, for example, is something mentioned by Linda Wang in her Red Hat Summit talk on cgroups; you could arrange your cgroups rules such that the sshd always gets a dedicated chunk of CPU time so that if a process runs amok on a server system, you still might be able to ssh in remotely to diagnose the problem.

It’s via these rules that you can set up persistent groups on the system. It would be kind of a pain to have to set them up every time a system is rebooted, especially the more processes and users you’re managing, and the more groups you need to create in order to manage them. You can use multiple cgroups modules (for example, cpu, cpuset, mem, net) within a single cgroup, and then write rules to place processes run by particular users and/or user groups into the cgroup, or write rules to place processes matching particular attributes into the group.

Above is a diagram demonstrating a cgroup that restricts only CPU usage for processes matching firefox-*, npviewer.bin run by users that are in the ‘guest’ group or whose usernames are ‘student1’ or ‘student2’. Kind of putting it all together, showing a single group and its resource allocation, and its associations with particular users and processes.

Who would use a UI for this, and why?

Tthe UI design mostly focuses on setting up persistent rules, and doesn’t really allow for on-the-fly cgroups rearrangement of currently-running processes and currently-logged in users. The thinking behind this is that there might be a couple of main reasons you’d be using a UI for cgroups:

Thinking about the way my previous experience with system administrators has typically gone, there’s sadly not usually a lot of time for proactive planning and organization – a majority of time tends to get spent on reacting to client concerns. If someone is calling you up on the phone to tell you that a process they are relying on has gone awry, it seems the most effective way to get them to stop calling you would be to change the rules to make a more persistent change to help them, rather than to just apply a change on the fly and wait for their next phone call. 🙂 So I think you’d probably prefer to change rules in reaction to a client complaint, not just do an on-the-fly change (although you could.) When you’re being proactive and initially setting up a system, I think you’d not want to do that on-the-fly at all, because you’d have to keep reapplying. It’d be better to craft a set of rules to persist on the system.

So it seems like these two main use case types – proactive resource allocation, and reactive allocation adjustments based on client feedback – are both best served by focusing on rules, so that’s why the UI design only focuses on those.

Maybe there is a case for doing the on-the-fly stuff though. It does make for some pretty awesome demos, though, like the one Bob Kozdemba gave at the Red Hat Summit last Friday, moving multiple copies of a graphics rendering tool between cgroups and vms and changing their configuration on the fly so you could visually see the affect of resource caps on the processes.) You could also use the on-the-fly configuration changes to test out a theory about how you should set the rules.

So, specifically, what kinds of problems could we imagine a user looking to solve with this interface? Our thoughts were that most likely a system administrator would find it most useful:

Under the ‘Proactive’ Category:

Under the ‘Reactive’ Category: 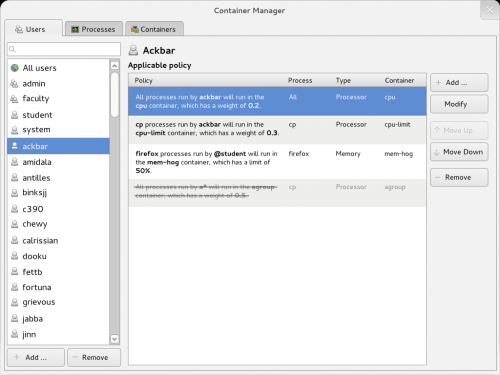 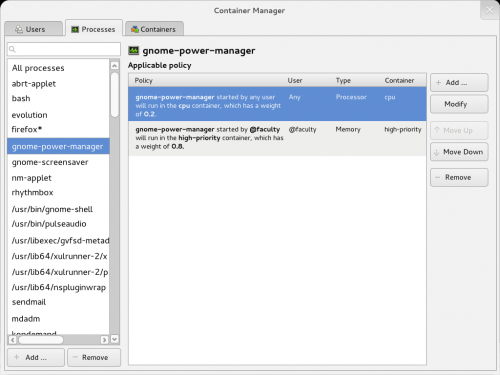 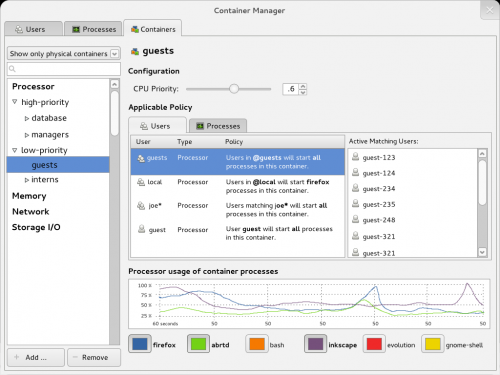 Here’s a bit of a braindump of where these need more work:

The wiki page for this design (including Inkscape SVG sources) is here:
http://fedoraproject.org/wiki/Design/CGroupsUI

Is this nuts? Does it make sense? Is this the wrong approach? Do you use cgroups? Would this be a useful tool, or does it suck?

I hope you’ll let us know.

Máirín is a principal interaction designer at Red Hat. She is passionate about software freedom and free & open source tools, particularly in the creative domain: her favorite application is Inkscape. You can read more from Máirín on her blog at blog.linuxgrrl.com.
View all posts by Máirín Duffy »
« A Beefy, Miraculous Day at SXSW (Expo Day 3)
Design team imageboard test server and WE NEED Fedora 16 theme artists! »

18 thoughts on “Ideas for a cgroups UI”