Recently I’ve been working on a UI revamp of authconfig-gtk AKA system-config-authentication. Here is
the existing UI: 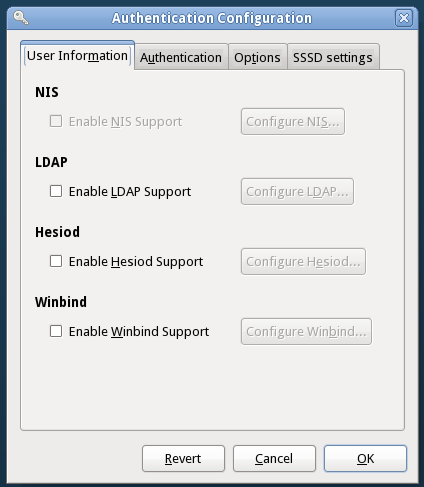 From what I’ve gathered about this UI:

That last point leads me to classify it as a good example of a box of chocolates GUI, meaning ‘you never know what you’re going to get.’ Configuring isn’t really a task that most people really have as a life goal nor is it something generally considered fun (it’s the cool stuff the configuration eventually enables you to do that’s fun!), so I think configuration / administration UIs like this often degrade to the ‘box of chocolates’ state. Authconfig-gtk will try each combination possible from your selections, trying each little chocolate, er, moving on from failure until it hits one that ends up being cherry creme-filled, er, actually works.

The catalyst for revisiting the UI is a cool new technology called SSSD that folks such as Stephen Gallagher and Dmitri Pal are working on. SSSD stands for ‘system security services daemon.’ It is going to unify identity and authentication access and enable features such as offline login and caching support for centrally-managed system logins (e.g., you don’t need to be on your corporate VPN to be able to log into your laptop which uses an LDAP account on that VPN.) The challenges:

At first I struggled a little bit with how to handle the situation. For Fedora 12, a panel specifically for SSSD was simply grafted onto the existing UI, and the model was a little similar to how the GNOME Shell preview works in the Desktop Effects panel of Fedora – it’s this new technology you can ‘enable’ or ‘disable’ in a modal manner: 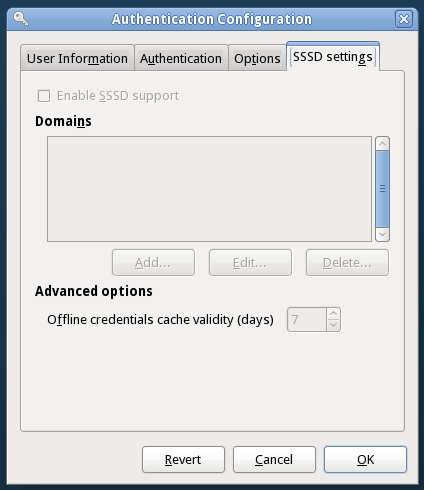 For Fedora 13, the path Stephen, Dmitri, and Tomas Mraz considered at first was to build a shiny new and fresh UI to handle SSSD-specific configuration, and keep the legacy UI as-is alongside it, with the plan to eventually retire it. The first set of mockups I put together along this path exposed some problems that Matthias helped identify as being too problematic:

Matthias really helped me on the path towards a design that I feel is a whole lot cleaner and simpler to use. Simply put, the new approach here is to take the existing UI, bring it up to speed and give it a clean overall design, and integrate the new SSSD technology into it without it being so painfully apparent which stack is doing what by having the divide between two different and somewhat intersecting UIs. Here’s the breakdown of changes in this new current redesign proposal:

One interesting design problem that popped up was how to handle smartcards. Nalin and Ray very patiently explained to me how they work – the model is different than the other technologies which really conflicted with my own mental model of the situation. Smart cards can be used to authenticate local and network accounts. So if I have a smartcard with the account ‘duffy’ on it, and I have both a ‘duffy’ local login on my laptop as well as a ‘duffy’ login on a corporate LDAP server – when I plug in my smartcard, how does it know whether or not it should log into my local account residing on my laptop, or my corporate account residing on the corporate LDAP server? If I understand correctly, you can’t just configure smart cards to only work for one or the other without affecting other login methods too. So rather than making smart cards another authentication method for LDAP as originally proposed, smart cards are an option in the ‘advanced settings’ tab that you can turn on for both local & remote or off for both local & remote.

Anyway, enough jibber-jabber. If authconfig-gtk / system-config-authentication is a tool you’ve used or if you work in an environment that has centrally-managed logins, please let me know if these mockups make sense or where they might not work in your environment. Or, if you see stupid mistakes or flaws in some of the assumptions / methods I’ve described here, please feel free to holler. We’d love to hear your feedback! (and at the very least, I hope this description of some of the design process behind the revamp is interesting for you 🙂 ) The full current UI revamp proposal is here. 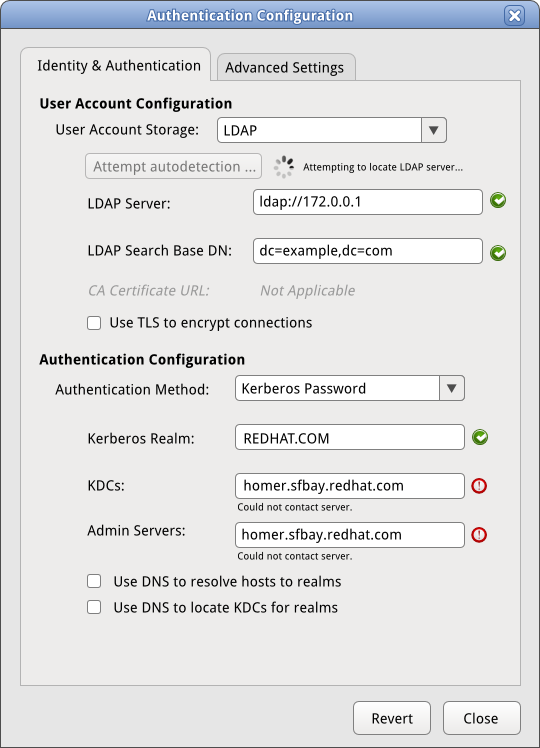 Máirín is a principal interaction designer at Red Hat. She is passionate about software freedom and free & open source tools, particularly in the creative domain: her favorite application is Inkscape. You can read more from Máirín on her blog at blog.linuxgrrl.com.
View all posts by Máirín Duffy »
« Random idea for design collaboration tool
Rensselaer Center for Open Source (RCOS) talk on Fedora »