Unpackaged Font of the Week

League Gothic is a sans-serif Gothic typeface, originally designed by American typeface designer Morris Fuller Benton in 1903. The League of Moveable Type has made this typeface available as a font under the the Open Font License as it was designed pre-Steamboat Willie and is under the public domain. Morris Fuller Benton designed over fifty typefaces, including well-known (to designers at least) ones such as Franklin Gothic, ATF Bodoni, Century Schoolbook, News Gothic, and Parisian.

How can you use League Gothic? It’s a very bold and strong font, easily readable from far away. Actually, it reminds me a lot of the Marvel Comics logo, so naturally I used it to create a tightly-spaced Batman (DC Comics) related type specimen. In all caps, the font has a very tall feeling because the legs of the letters are very tall – the x-height seems to be much taller in proportion to the full letter height than in other typefaces. The League of Moveable Type page for League Gothic has a nice type specimen for the font – it’s a clear and readable typeface for info graphics, but also could make for a nice, epic-feeling logo.

League Gothic has coverage of some accented characters in Latin Supplemental, but Latin Extended A and B are not covered: 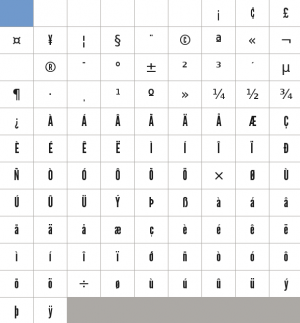 League Gothic is licensed under the Open Font License.

So, you want to package League Gothic?

Way to go – you’re rad! You’ll want to follow the first steps here next to the ‘if you intend to do some packaging’ header:

Our fonts packaging policy, which the above refers to, is documented here:

And if you have any questions throughout the process, don’t hesitate to ask on the Fedora Fonts SIG mailing list:

Last week’s font was Tuffy Infants 2 by Thatcher Ulrich. Nobody has picked up the font package request yet! Would you like to?

Máirín is a principal interaction designer at Red Hat. She is passionate about software freedom and free & open source tools, particularly in the creative domain: her favorite application is Inkscape. You can read more from Máirín on her blog at blog.linuxgrrl.com.
View all posts by Máirín Duffy »
« Inkscape Class Day 4
Inkscape Class Day 5 »

13 thoughts on “Unpackaged Open Font of the Week: League Gothic”